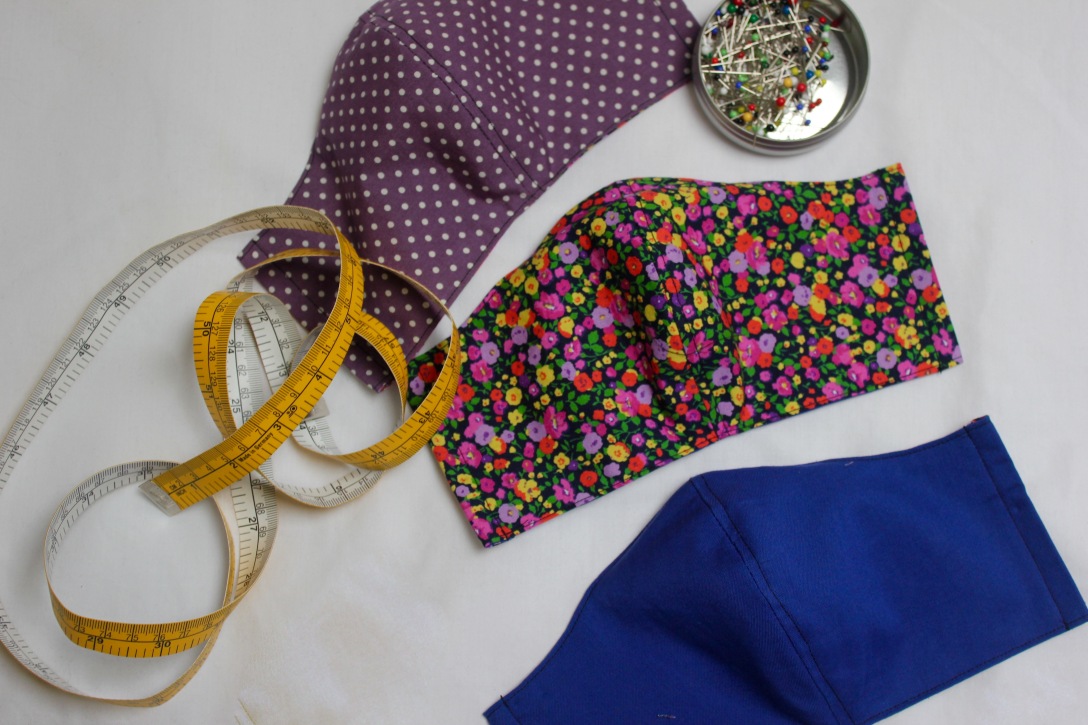 I’ve uhm-ed and ahh-ed for a long time before writing this post, but I think it’s worth writing. I hope you’ll agree.

I have lived with anxiety for as long as I can remember, and sought treatment when I was around 19/20 years old. I’m often very high functioning – i.e. a lot of people I know don’t think of me as an anxious or depressed person – but need a fair bit of alone time to recharge & process my life and associated emotions. That’s one of the ways sewing comes in. When I’m immersed in a project I’m concentrating fully on the challenge of piecing something together bit by bit, of making that sleeve fit into that armhole or getting that zip aligned perfectly, I’m simply not thinking about everything else that’s going on in the world.

When Covid-19 hit, the sewing world leapt into action. Scrubs, masks, gowns – you name it, we’d make it. And it made me nervous, knowing nothing I made could ever be medical grade, but it seemed to be widely accepted, particularly in the case of things like scrubs, that whatever we could make would do. So I duly signed up with Scrubhub, received a roll of fabric and a set of pattern pieces and got to work. Except that every time I approached the project, first to layout the pattern, then to cut, then to sew, I was completely overwhelmed. For days, my mood plummeted and I lost all sense of drive. The smallest things upset me monumentally. I found it really, really difficult to regulate my emotions and respond proportionally. Each task seemed to take gargantuan effort: I’d do one thing and feel like I could sleep for a week afterwards, except I couldn’t actually sleep and was routinely waking up at 3am, finally desperately falling back to sleep at around 5:30 or 6am, just when I’d been about to give up and start the day.

In the end, I didn’t make any scrubs. The anxiety combined with my overlocker choosing the perfect (read: most inopportune, as they always do) moment to start playing up meant I had to call the area organiser and explain that I just couldn’t do it. I felt, and still sort of feel, like a failure. I felt guilty. That finally my skills could be put to good use in a time of national crisis and I hadn’t stepped up to the plate. That when, in years to come, people asked “What did you do during the pandemic?” I would say “Nothing. I made summer dresses for myself and bought fabric I didn’t need”.

I know, of course, that this is not a helpful way to frame the situation. That in fact, we are all simply doing what we need to survive right now. For a lot of people that’s sewing useful things. For others, it’s sewing things that make us feel good – or even sewing nothing at all. Sewing, in this context can of course be replaced with any hobby of your choice – cooking, baking, exercising, writing, the list is endless.

It also occurred to me that this is not the first time that I’ve had to re-evaluate my relationship with sewing and the context in which I sew. Despite being professionally trained in Costume Construction, and having worked in the industry for 5 years, I have made very little professionally. I took on other roles within a costume department, steering away from any designs that needed making from scratch. I’ve altered huge amounts of things and made various repairs along the way, but I realised that every time I’ve had to sew something for a specific end result, to somebody’s specifications, that would be inspected and pulled apart until it was right, I’ve hated it. There was a long time after university where I genuinely believed I hated sewing. It wasn’t until I decided to make something for myself one day that I realised that I do in fact enjoy it and find it meditative, as long as it’s on my terms.

There are two phrases that crop up a lot in the sewing community: selfless sewing, and selfish sewing. The former being those projects we make for other people: children, friends, family. I’ve used it myself just a couple of months ago, when I made my mum a blouse. Then there’s selfish sewing. The projects we make for ourselves and only ourselves. The things that perhaps we don’t necessarily need but that we want. Frilly summer dresses and big sleeved blouses. Tailored coats, jackets or trousers that we slave over, dedicating time to our machines rather than other aspects of our life. These are phrases that are in no way meant maliciously, they’re nothing more than a bit of fun.

But I think it’s high time we get rid of the concept of selfish sewing. There’s nothing selfish about spending time doing things that make us feel good, whether that’s a couple of hours making another set of jersey PJs or a couple of days, even weeks, on a more intricate project. The satisfaction that we get every time we put on something we magicked out of thin air with just some fabric and our hands isn’t selfish, it’s a radical act of self care. It’s a way to look after ourselves and retreat from the rest of the world for a little while. Whatever your profession: doctor, teacher, marketing manager, homemaker, we all need some respite. Hell, even if you’re a fashion designer or costume maker you need something that isn’t work to think about.

And, I’d argue, that not only is sewing not just soothing, it’s academic. It keeps our brains active in a way that other hobbies don’t. Whether it’s the maths of working out the amount of fabric needed to pleat your skirt or a head scratching fit issue, it’s not some kind of idle hobby that only benefits our wardrobes. And even if it was, that wouldn’t be a problem. I often wonder if it’s because of the inherent associations with gender and how sewing is seen as ‘women’s work’: after all, is there such a thing as selfish carpentry? Selfish mechanics? Selfish weightlifting? (At this point I realise I don’t actually know that much about stereotypical mens hobbies, apologies).

So no, I haven’t done much “selfless sewing” during the pandemic. This week, finally, I succumbed to making masks after the government guidance changed. They’re quick projects – each one takes no longer than 30 minutes max, though I’m acting as a one woman production line and sewing them in bulk. And yet, despite being able to easily make all I need and more in a day, it’s a task I’m stretching out. Put simply, when I spend more than a couple of hours making them, the anxiety that’s always on a low level simmer within me, boils over. I know the exact reasons for my anxiety: these masks are for other people, people I love, hopefully to protect them. These masks are not medical grade. In fact, these masks won’t protect my loved ones from the virus at all, but will  merely reduce the risk of them transmitting anything they may be carrying to other people. I can only hope that the people in their communities will wear face coverings too.

I am so grateful to the people who are able to put their skills to good use and contribute to the effort. I am so proud of how quickly we as a community responded to the call to arms to kit out our frontline workers. To anybody who feels as I have felt in the last few weeks I send my love and a nice cup of tea. At the end of it all we’ll don our finest frocks and raise a glass to being selfish in our sewing.