Forgive this slightly delayed festive post, but I wanted to share the gift I made for my lovely pup, Nell. She’s always spoiled rotten with treats and toys (and deservedly so, she is in my completely unbiased opinion the best dog in the world) so I thought I’d do something a little different.

I’ve used to love buying Nell a new Christmas jumper each year – and christening her with a festive nickname, ranging from Santa Paws to Jingle Nell – but my Dad’s finally put his foot down and banned it because “she already has a coat”. *Insert eye roll* some people just don’t get it! So this year I thought I’d make her a fun themed collar to see her through the festive season, and a jazzy bandana to go along with it.

Nell’s a beautiful, regal dog but she’s also very silly so these silly themed fabrics from Fabricland fit the bill perfectly. At £4.80 p/m (and only needing 0.5m for this project) they were also a total steal! In fact, the most expensive part of the order was the postage, which is really saying something. Alongside the fabric, the webbing for the interior of the collar and the D-ring both came from Fabricland as well, and the parachute clips and tri slides came from Amazon. Both fabrics are 100% cotton so perfect to throw in the wash every time she decides to lie down in a puddle in the woods (read: every time she goes to the woods). 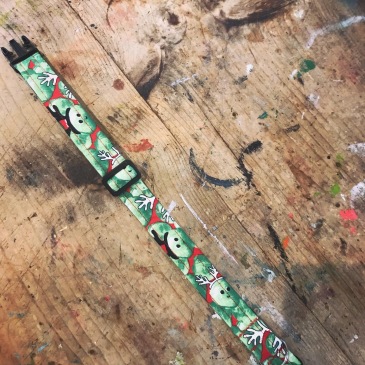 I didn’t want too big a print for the collar – given that it’s only 1″ wide it would be too easy to lose the details. These silly sprouts are a touch bigger than I expected, but in the end it didn’t really matter and it all came together perfectly! I followed this tutorial by Halifax Dog Ventures and it turned out to be a really fun, quick make – which is saying a lot for my easily bamboozled brain.

Once the collar was made, it needed to be joined by a festive bandana, obviously! Nell’s no stranger to a bandana but she simply didn’t have one befitting the season. These cracking carrots fit the bill perfectly, completing her wearable vegetable ensemble. I drafted a pattern based loosely on this Spoonflower tutorial, but cutting the top edge on the fold rather than the centre front to make it double sided. I considered making it reversible, but in the end stuck with the same on both sides – this time at least.

I made them with the intention to wrap them up and pop them under the tree for the Big Day, but it seemed a shame not to have her getting into the Christmas spirit early like the rest of us (alright, me) so they went on her as soon as I got back to Leeds last week – it’s just taking a while to get round to photographing her…

The best bit about making these bandanas are how quick and adaptable they are. The whole world of printed cottons lay before you to decorate your pooch with – you could easily make one for any and every special event. I’m already thinking about a personalised one with her name on, an Easter bandana, a birthday bandana… the possibilities are endless.

What do you think? Are your pooches as pampered as ours? I’d love to see your festive pet makes!